The Surprising Intimacy of the Live-Streamed Funeral 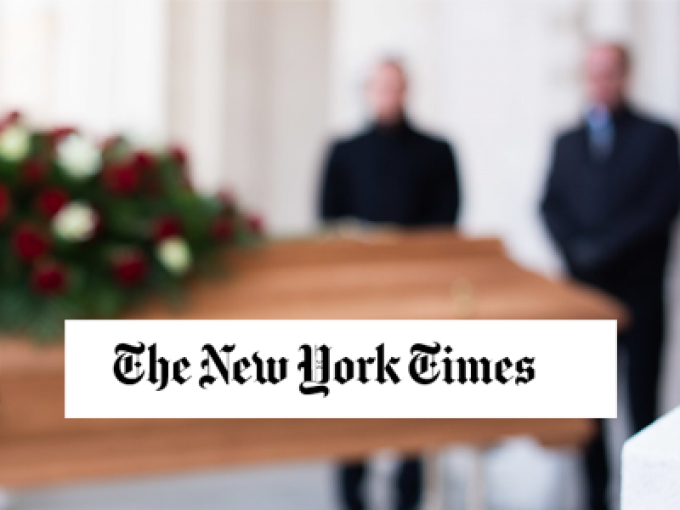 When Candida Rifkind got the call on March 14 that her Aunt Cecilia had died, she realized she couldn’t attend the funeral. The rapid spread of the coronavirus was making international travel more uncertain than ever. Just a day earlier, the United States had blocked most European visitors from entering its borders. Ms. Rifkind, an English professor who lives in Winnipeg, Manitoba, didn’t want to risk it. (Canada and the United States closed their borders to each other the next week.)

So the family devised a solution: Host a small funeral in Los Angeles, her aunt’s home city, and post a live stream for everyone else. Late in the morning on March 18, Ms. Rifkind received a protected link and a password. She hooked up her laptop to the TV, sat with her husband on her living room couch and streamed her aunt’s funeral from nearly 2,000 miles away.

As governments across the globe espouse self-isolation to stem the spread of the coronavirus, funeral homes are facing intense pressure. In Spain, local officials traced over 60 Covid-19 cases to a large funeral held in late February. On March 20, Washington State affirmed that funerals and memorial services were banned indefinitely. In Kentucky, as in much of the United States, funerals are restricted to the “closest of family,” and guidance from the White House to “avoid social gatherings in groups of more than 10 people” has placed firm caps on how many family members can attend.

Funeral homes racing for new ways to help people grieve at a remove have taken up a much-maligned technology: live-streaming. But in the age of social distancing, mourners are finding online funerals to be a surprisingly intimate way to honor loved ones. Even in self-isolation, collective grieving still matters.

“I thought it would be distant and cold, but it was the exact opposite,” Ms. Rifkind said. At her aunt’s funeral, attendance was restricted: her aunt’s ex-husband, sister and three children, plus the rabbi and cantor from their synagogue. Several times during the ceremony, the rabbi turned to thank the live-streaming audience, which also included Ms. Rifkind’s brother and mother. “At the end he commented on how difficult these times are for bereaved families but reassured us that ‘all we can do is all we can do,’” Ms. Rifkind said.

Usually when Ms. Rifkind attends funerals, she said, she doesn’t cry. It’s too much pressure: She puts on a brave face for fear that her grief will become a burden. But in her home, as she watched her cousins say goodbye to Aunt Cecilia, “I didn’t have to hold it together for anyone,” she said.

Some form of funeral live-streaming has existed since FuneralOne began offering it in 2003, but the idea never reached the mainstream of the industry. Last year, the National Funeral Directors Association estimated that only about 20 percent of all funeral homes offered a live-streaming option. That’s because of long-held assumptions that live-streaming is impersonal. For people reeling from a loss, the communal catharsis of a funeral seems to demand a physical presence.

“When you associate live-streaming and webcasting with funerals, you chase away the vast majority of people very quickly,” said Bruce Likly, who has run the funeral live-streaming service TribuCast for over a year. Part of the problem is that most people’s concept of a funeral stream — a rather ghoulish two hours of coffin footage — is wrong. “If all you’ve done is shot a camera on a casket, it leaves that remote attendee feeling anxious, uncomfortable, sometimes even voyeuristic,” he said.

What TribuCast and other services like it promise is a humanized stream. Alongside the video is a collection of memorabilia — photos, a family tree, a link to the obituary, a memorial video — designed to make the funeral a bit more intimate.

For the Centers for Disease Control and Prevention, that’s proof enough that funeral streams are a legitimate gathering place for mourners. In mid-March, a C.D.C. epidemiologist said the agency would “encourage” people to shift their funeral rituals to live-streaming so that the grieving process could continue under safe conditions. All told, public-health restrictions are ushering the funeral industry toward a new reality.

While some morticians are taking to Twitch, YouTube Live and Facebook Live to stream funerals, others are relying on the handful of funeral streaming specialists scattered across the world, among them OneRoom, FuneralOne and TribuCast. “This may very well represent a tipping point,” Mr. Likly said. In the past few weeks, TribuCast has registered roughly 30 new funeral homes each day. That’s a major spike compared with the company’s previous average of three to four per day. OneRoom saw online funeral attendance more than quadruple during the second half of March, according to the company.

Although some funeral homes have always offered free live-streaming, in normal times many tack on a $200 or $300 charge. But in the past month, many homes — including Mount Sinai Memorial Parks and Mortuaries in Los Angeles, which hosted the funeral of Ms. Rifkind’s aunt — have cut out live-streaming fees.

Outside of a pandemic, people opt to live-stream funerals for a host of reasons. Maybe you live far away and you can’t afford to travel, or your work schedule is tight and you’re worried about taking a day off, or you have a disability or health problem that makes long trips difficult. Undocumented immigrants can’t get home to a funeral because of border restrictions, active-duty military members lack the opportunity to make a last-minute trip overseas, and when a beloved resident dies, nursing homes don’t always have the capacity to transport dozens of residents to a funeral.

At TribuCast, Mr. Likly has witnessed the full spectrum of reasons families choose streaming. He told me of a hospitalized man who used TribuCast to watch the funeral for his wife of 62 years. The man wasn’t able to leave his hospital bed, but he didn’t want to miss the ceremony.

Another example that Mr. Likly points to: a woman who couldn’t get to Washington State for her father’s funeral. She was pregnant and unable to travel, so she wrote her eulogy and asked her brother, who did attend the service, to read it. On the live stream, she watched her friends and family react to her final message to her father.

“People grieve so deeply when they lose a loved one. That grief is often amplified when they can’t get to the service,” Mr. Likly said. “To be included in it is incredibly powerful.”